It's been a bit quiet around here lately, and a bit since I've posted.  We've had a lot going on, nothing bad, but just really busy and all that jazz.  But there are exciting things on the horizon including the launch of the new Weight Watchers on Monday!  Yippie!  I am about 8 pounds away from where I would ideally like to be, and I am hoping that the new WW will help get me there... So wait for that stuff.  (But that all being said, it's almost a year since I hit my WW goal weight and I have stayed at or under that weight.  Yeah for me!!!!)

ANYWAY... enough of that crap.

Today, G and I had to vacate the premises so that someone could fall in love with our condo and offer us a bazillion dollars cash for it.  We hadn't eaten and had spent all morning making our home perfect, so we decided to treat ourselves.  Little did we know the major treat that was in store for us!!!!

Oh yes, my son.  Off to Ronscevalles to eat some Polish food!  Yippie! 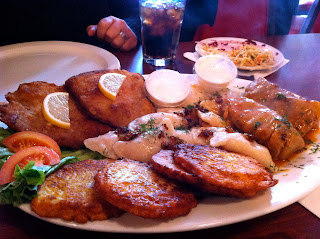 And the Polish Platter for Two was the way to go.  And there it is!  Two schnitzels, four potato pancakes, TEN pierogies, two cabbage rolls, and a BUNCH of salads.... 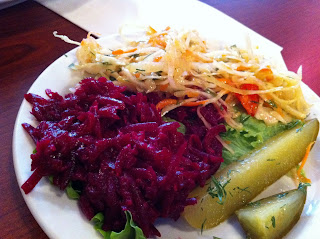 Aren't those pics great?  Ha ha, they are from my silly phone.  I just can't seem to take a good photo with it.  I am lame.

But whatever... Chopin Restaurant is a winner, at least in my book.  I am not saying that it's everybody's cup of tea, or that it's the best or most authentic necessarily because honestly, I have no idea.  BUT, I will say that it was super duper great to have a nice meal and a relaxing moment amidst the chaos of getting our home ready for sale.

Posted by dynagrrl at 9:44 PM No comments:

I love guajillo chiles because they are such a deep, robust red and colour whatever you add them to so beautifully. I had also just bought some anchos because I like them and realized I'd not cooked with them in some time. So sitting in the kitchen I had both and wanted to use them to whip up a dinner for some old friends who were visiting from England and to whom I had promised Mexican food. 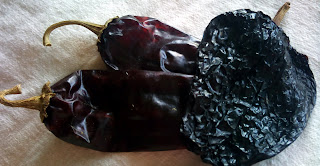 It took some searching but i finally found a recipe that gave me some guidance on putting together an ancho-guajillo enchilada sauce. It was a bit of work but did yield a rich red sauce that wasn't too spicy.

Ancho-guajillo enchilada sauce
Remove the stems and seeds from the chiles. Soften the chiles by first roasting them for 10 to 15 seconds on each side on the comal or a hot, dry frying pan. Then pop them into a small pot of boiling water while you do the rest of the preparations. Once they are soft, put them in a blender.

Dry roast the garlic cloves and onion on the comal. Peel and add to a blender. Also put the tomatoes in the blender.

If you have whole spices, it's best to use them and grind them up just before you need them. If you have pre-ground, that's fine too. Add the cumin, coriander, and oregano also to the blender.

Sieve the tomato/chile mixture into a bowl, using a wooden spoon to push as much liquid through the seive as you can. You should be left with some bits of skin and seeds once you've got all your sauce through. Just toss that stuff.

Heat the oil in a medium pot and add the tomato/chile mixture so you get some sizzle. Reduce heat and cook, stirring occasionally, for about 15 minutes. The sauce should become a deeper red and still be quite runny. If it gets a bit too thick add some water or chicken stock to thin it out. Once it's all nice, you can go ahead and make your enchiladas.

We used left-over turkey that we had frozen after Thanksgiving. Mix it all up with some of the enchilada sauce so it's covered but not too saucy. I also didn't have the usual corn tortillas at home but had seen someone at the Brick Works market making them that morning so ordered up a dozen from her. They were good but at $1 a tortilla, not really the most cost-effective way to go! Basically once you've got the meat sauced up, just dip each tortilla in the sauce to make it soft, put a spoonful of meat inside, roll it up and place in a baking dish. Once you've got the baking dish full of rolls, cover with the rest of the sauche and top it with cheese (I used queso fresco, which I think is great but it doesn't get all melty like some other types of cheeses). Bake at 350F for about 30 minutes.
Posted by gjc at 1:50 PM 1 comment:

Buy from my Bro 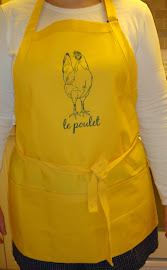 This work is licensed under a Creative Commons Attribution-Noncommercial-No Derivative Works 2.5 Canada License